On March 2nd of 1899, America's 4th National Park was created by Congress and signed into reality by President William McKinley. Mount Rainier, originally called Mount Tahoma or Tacoma, the National Park is celebrating its birthday.

The Outdoor Society published this site as a dedication to this fantastic place in Washington State. Truly one of the most beautiful places on earth.

Enjoy our most amazing facts about Mount Rainer National Park.


Mount Rainier is the 4th National Park to be established.

The Glaciers of Mount Rainier


Mount Rainier has 26 named glaciers that make up over 35 square miles.

The mountain is the most glaciated mountain in the contiguous United States, though it has seen a drastic reduction in the size of the glaciers in recent years due to climate change. The Nisqually Glacier has receded 38 feet(!) since 1910, far faster than average.

The Wonderland Trail circumnavigates the entire mountain transitioning through the various climates on every side of Mount Rainier. The well-marked and well-maintained 93-mile loop trail has a total 22,000ft (6,700 m) of elevation gain, crossing rivers on high suspension bridges and giving jaw-dropping views each and every mile.

The average trek on the Wonderland Trail is completed in 10-14 days, but the current record is just 18hr 27 m 42s is held by Ryan Ghelfi


In November of 2006, a foot and a half (18in) of rain feel in 36 hours on Mount Rainier. The deluge of water rushing down the mountain swept away a campground along the Nisqually River, closing access to the park for 6 months. The storm also washed away the road along the Carbon River, which is still closed to vehicles.

First of many Ascents 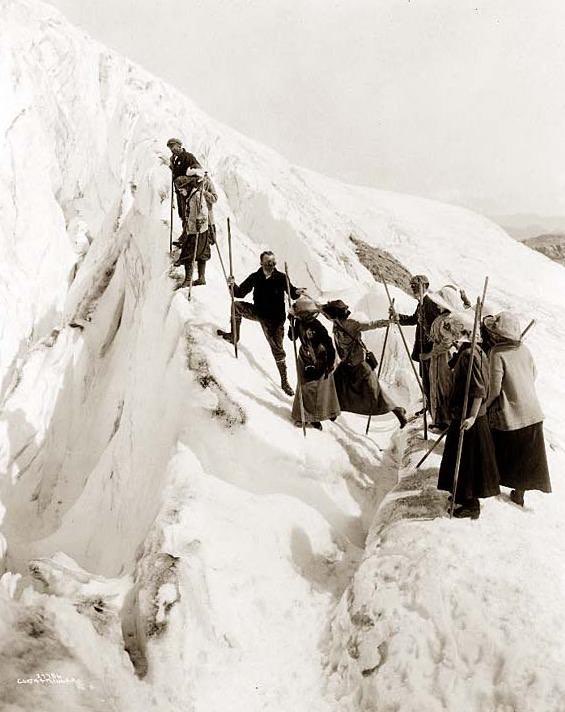 Mount Rainier was first climbed in 1870 by Hazard Stevens and P. B. Van Trump, before the region became a National Park. It was famously climbed by John Muir in 1888, who was less impressed with the view from above than from the valley below. In 1999, Vice President Al Gore and a team of guides summited the peak. Mount Rainier is said to be climbed by around 10,000 adventurers annually, usually led by the local guide services that have taken everyone from Roger Goodell of the NFL to climbers training for the Himalayas. The two most notable climbers of Mount Rainier are Ed Viesturs, who has summited Mt Rainier over 200 times, and Lou Wittaker, who has summited over 250 times.

In 1925, Mount Rainier National Park was the destination for Walt Disney and his wife on their honeymoon.

While little is know about their stay, Walt Disney enjoyed the Pacific Northwest’s natural beauty enough to return to the region. In 1952, a film was made in a cabin in the wilderness of the Olympic Peninsula called “The Olympic Elk.”

In April of 1935, Mount Rainier was the location for the US National Championships and Olympic qualifiers for downhill and slalom racing.

Located at Paradise, the downhill course was regarded it as the toughest downhill location ever by the Seattle Times. They weren’t exaggerating.

Mount Rainier had its last eruption events between the 1820s and the 1850s, with the last isolated eruption event occurring in 1894.

Considered an active volcano, Mount Rainier, a stratovolcano, hasn’t shown any signs of an eruption anytime soon. However, the communities surrounding Mount Rainier are preparing for a possible eruption, thanks in large part to heightened awareness of Lahars, a mess of melted glacial ice, mud, and rock that would occur from an eruption event of any size. 150,000 people are said to live on the remains of an existing Lahar flow.

If Mount Rainier were to erupt in the same violent style as Mt. St. Helens, it could destroy all of Enumclaw, Orting, Kent, Auburn, Puyallup, Sumner and Renton, with potential for serious damage extending to Seattle and Tacoma, potentially causing tsunamis in Puget Sound.

Again, the mountain is showing no signs of erupting any time soon, so breathe easy, but be prepared.

Designed and developed by Mathias Eichler
© 2020 The Outdoor Society